Effective 7/1/2021, due to new VAT rules, we will no longer ship to the European Union.

(No reviews yet) Write a Review 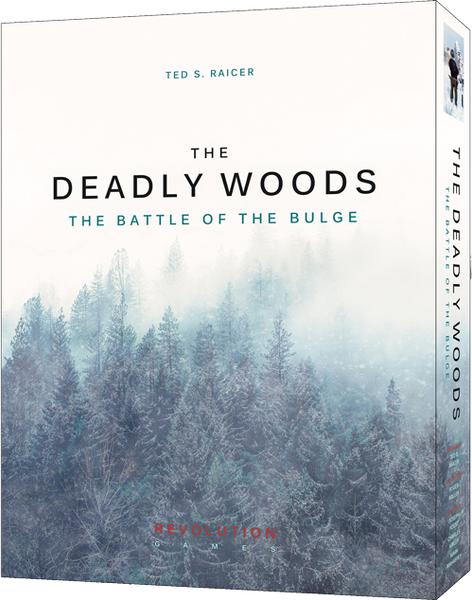 Now Shipping
The Deadly Woods: The Battle of the Bulge
Designed by Ted Raicer
In December 1944 Hitler launched a massive offensive against the weakly held Ardennes forest section of the Allied front in Belgium. Achieving complete surprise, the Germans nevertheless faced tough resistance from the battle's opening days, and the offensive was virtually over 10 days after it began. Their followed a bloody Allied counterattack which gradually erased the bulge the Germans had created in the Allied line.
But you probably know all that. Yet another Battle of the Bulge game? Why yes. But one with a different approach. Specifically, award-winning designer Ted S. Raicer has taken a modified version of the chit pull system pioneered in GMT's The Dark Valley: The East Front 1941-45 and brought it west for an exciting new take on this classic wargame subject.
The scale of the map (which takes up about 2/3rds of a standard 22” by 34” map sheet, the rest given to tracks, charts and tables) is at 3 miles to the hex. Allied units are mostly regiments and brigades, ,with most German armor and infantry divisions divided into two kampfgruppen (battle groups), German artillery, Greif commando teams, infantry trucks, and the Von der Heydte paratroop unit are included as Asset markers, as are Allied artillery, scratch units, and engineers.
The game runs from December 16 1944 to January 16 1945 when the Allies reunited their divided front by recapturing the key town of Houffalize. Each turn through December 31st equals 2 days and the turns in January are three days long. The full campaign lasts thirteen turns while a scenario for just the German offensive is six turns long. But with The Deadly Woods chit system and its multiple Action Rounds, a lot can happen in only six turns.
Each side gets a number of Action Chits each turn, which vary both in number and type. These include multiple Reinforcement chits which determine the arrival Round (but not Turn) of Allied and German reinforcements. There are German Logistics Chits which introduce historical supply effects. There are Movement or Combat chits which allow a player to choose. There are also Movement chits and Combat chits which limit the Active Player to the capability listed on the chit. And there are special chits, such as the German 5th Panzer and Allied Patton chits that allow some combination of Movement and Combat.
After the Initiative Player chooses the first chit played, the remaining chits are drawn randomly from a cup. A player may draw up to two consecutive chits and then enemy player must get the next chit.
Armor is severely limited in moving through other units along roads and bridges and at projecting ZOC into woods terrain. Combat may result in losses, retreats, or stalemate.
Each turn should take roughly an hour for players who know the rules. The German Player can win an instant victory by exiting units off the north map edge west of the Meuse or by holding 5 objectives at the end of a turn. Otherwise the game is won on geographic Victory Points. (The Germans also gets Victory Points for crossing the Meuse in supply, even if they are forced back across the river, so he has a reason to push even when the arrival of the British makes an Instant Victory impossible.)
So another Bulge game, but one with the historical action and decisions of games with a much bigger footprint and playing time. And with a unique take on the chaos and friction of the battle that makes it a great choice for solo play. Even if you are bulged out, you'll want The Deadly Woods in your collection!​
Components
22x34 in map
22x11 setup map
1 1/2 x 5/8" counter sheets
Rulebook
Player aids
Dice (boxed game)
Game box or ziploc

(No reviews yet) Write a Review

Thunder in the Ozarks - Boxed Edition

Battles of the Bulge: Celles