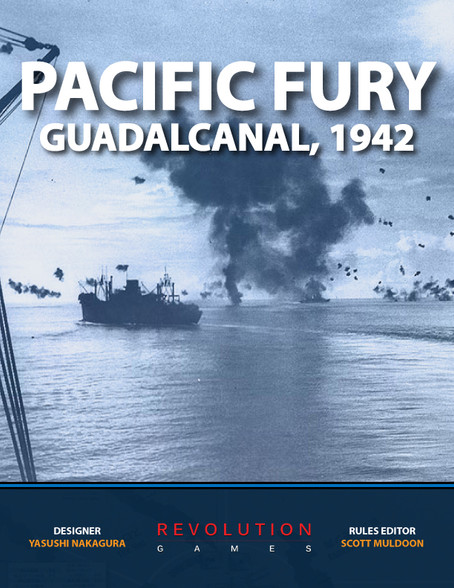 Pacfic Fury: Guandalcanal, 1942
Originally publish in Japanese by Bonsai Games, Revolution Games brings Pacific Fury to the English speaking world.
Pacific Fury is a fast playing simulation covering the Solomons campaign in the South Pacific from August to November 1942. Pacific Fury is a game for two players: one controls the Japanese forces and the other controls the US forces (including RAN ships). The game starts on 7th August 1942, after the US Marines 1st Division landed on Guadalcanal and occupied the airfield there.
The game system features an abstract semi-hidden area movement system where both players must determine the timing and size of task forces during an operation.  The American player starts with control of Guadalcanal, can the Japanese must take it to win!
Play time is about 1 hour.
Components:
11 x 17" map
53 die-cut counters
8 page rule booklet
ziploc bag