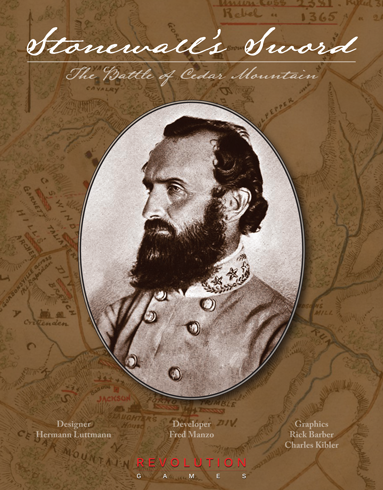 Stonewall’s Sword: The Battle of Cedar Mountain is a medium-sized wargame (176 counters and a 17” x 22” map) that allows you to explore the reasons why things almost went horribly wrong for the Confederates that day. The map scale is 140 yards/hex and each unit counter represents an infantry regiment or artillery battery. The game system features the Blind Swords chit-pull mechanic, which thrusts players directly into the fog-of-war of an American Civil War battlefield. Players are never quite sure of when formations will activate – neither the enemy’s units nor their own! Event chits, each tailored to the conditions that existed at the battle, provide players with opportunities to create out-of-sequence attacks, rallies and a myriad of other actions. Players are thus constantly challenged with each chit-pull to produce a plan of action that will best exploit the current circumstances on the field. This unpredictable player interaction creates not only an exciting gaming environment but also accurately simulates the confusion, intensity and unusual circumstances of the Cedar Mountain battlefield.