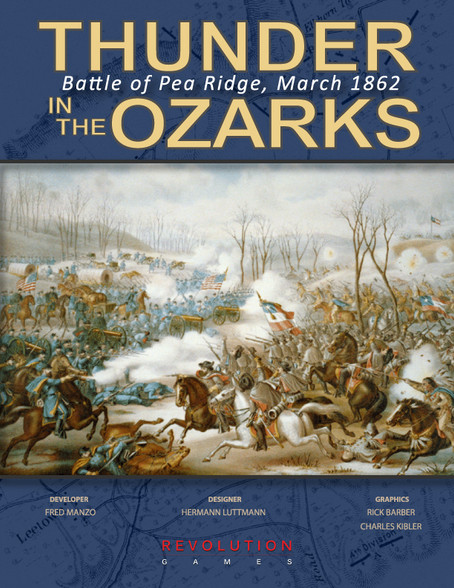 Thunder in the Ozarks - Ziploc Edition

The Battle of Pea Ridge was a critical engagement fought on March 8th and 9th 1862 between the Confederate Army of the West under Major General Earl Van Dorn and the Federal Army of the Southwest under Brigadier General Samuel Curtis.
In the winter of 1861, the Confederate army in Missouri, then commanded by Major General Sterling Price, had been chased back into the Boston Mountains of Arkansas. The first drive on St. Louis had been repulsed and Van Dorn was summoned to take command of the force and launch a new offensive into the heart of Missouri. Van Dorn, an Indian-fighting cavalryman by trade, arrived at the Rebel camp and even though he was quite ill (due to a fall into a river) he immediately roused the troops. He proposed to launch an immediate attack, despite the freezing weather and fatigued state of his troops. Van Dorn force-marched the army north and managed to pull off a classic Napoleonic stratagem - the “maneuver sur la derrieres”. He placed his army astride the line of communications of his enemy and by any normal military measure this should have been settled the issue for the two armies. But by doing so at such an ill-advised time and at such an inhuman pace the Rebel troops were little more than a frozen and exhausted armed mob when they finally reached their positions.
Brig. General Sam Curtis was not a man to be intimidated and he realized that he had a fighting chance, even in this seemingly impossible position. Perseverance and hard, smart fighting by men like Colonel Grenville Dodge and others turned what looked to be a potential disaster into a grand victory. The Battle of Pea Ridge secured for the Union all of Missouri and the northern part of Arkansas, resulting in approximately 85,000 square miles becoming Federal-controlled territory.
This is the second game in the Revolution Games/GMT series of American Civil War games. The first game, Stonewall’s Sword simulates the battle of Cedar Mountain in 1862 and is available from Revolution Games. The next game Hammerin Sickles, the second day of battle at Gettysburg, from GMT is now available for preorder.
Designed by Hermann Luttmann
Ziploc Edition
2 - 22 x 17 inch maps
176 - 5/8 inch counters
24 Page Rule Booklet
5 - Player Charts
Ziploc Bag