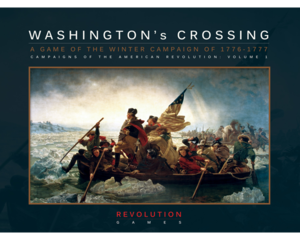 Washington’s Crossing is an operational simulation of the American winter campaign of December 25th, 1776 to January 6th, 1777 that resulted in the twin victories of Trenton and Princeton and turned the fortunes of the American Revolution. The situation is fluid and desperate for both sides, allowing for numerous strategies for both players. Victory is determined through both battle victories and occupation of key objectives to simulate the British effort to pacify and restore the loyalty of New Jersey.

​
Washington’s Crossing is the first game in the Campaigns of the American Revolution series. Future linkable titles in the series will cover the New York campaign of 1776, the Philadelphia campaign of 1777, and the New Jersey campaign of 1778.
Game Components:
​
The game consists of the following components:
Game Designer : Roger Miller
Developer: Richard Handewith
Game Art: Mark Mahaffey