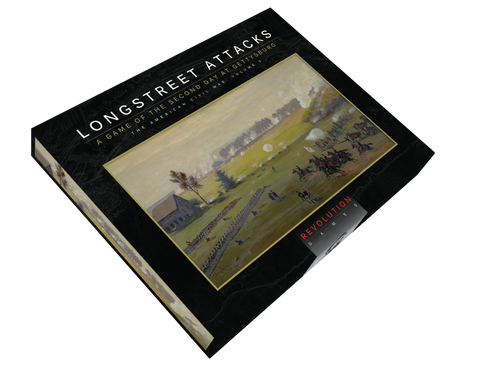 Longstreet Attacks: The Second Day at Gettysburg is the third game in the Revolution Games series of American Civil War games. The first being Stonewall's Sword and the second being Thunder in the Ozarks.
Longstreet Attacks: The Second Day at Gettysburg simulates the fighting on July 2nd, 1863 during the second day of the Battle of Gettysburg and focuses on the southern portion of the battlefield. These engagements involved General Longstreet’s attack against Sickles’ positions, with troops from Hood’s and McLaws’ Divisions, assisted as well by Anderson’s Division of A.P. Hill’s Corps.
SCENARIOS
The Round Tops (Tutorial) – a small, limited battle depicting the fighting around the Round Tops and which serves to teach the system to new players.
That Higher Ground (Historical) – the entire attack by Longstreet beginning at about 4:00 pm, using the historical deployment locations and 2 more in development
Designed by Hermann Luttmann
Boxed Edition
1 – 22” x 34” map
2 – 5/8” countersheets
1 – Rulebook
5 – Player Charts
2 – Six-Sided Dice
Game Box